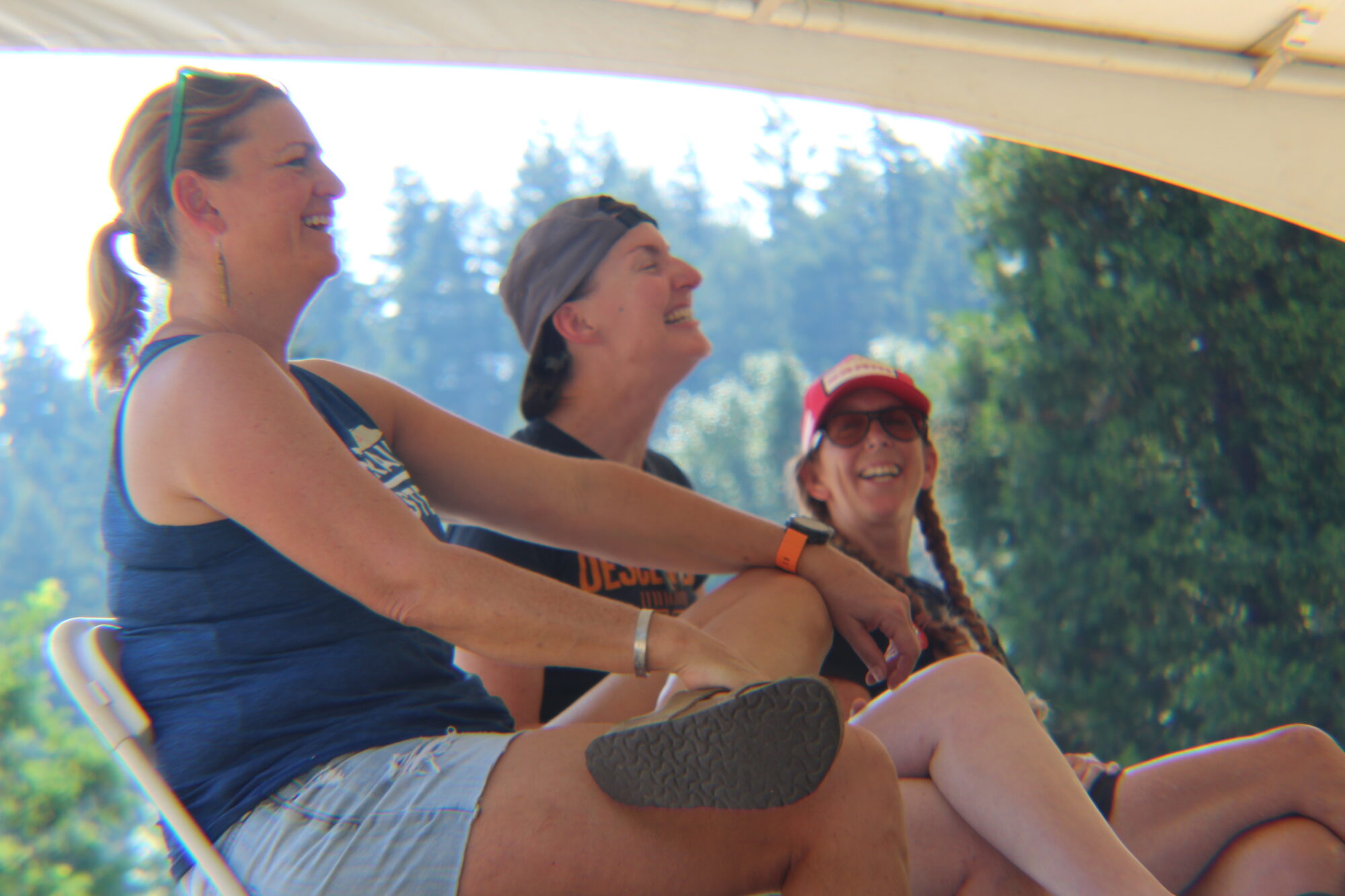 The 2022 NICA Women’s Gathering is more than just building connections between female riders, it is about breaking down negative stereotypes and ensuring the future of meaningful relationships between NICA female leaders. Through a mixture of informative sessions, connecting with other coaches, and guided rides - leagues in the Northwest are brainstorming how to get more girls on bikes.

In late July, close to 50 women gathered beside the Willamette River in the mountains of Oregon to connect, learn from experts and each other, and ride mountain bikes. In a sport still dominated by men, the retreat provided an oasis for women to share their experiences and brainstorm ideas about how to attract more girls to mountain biking and more women to coaching.

Hauswald said the inspiration for the gathering came partly from conversations they were all having with female NICA coaches. “We realized many of them, both in NorCal and in Oregon, were having similar coaching experiences,” said Hauswald. “So we thought it would be meaningful and helpful to get them together to share strategies and ideas to help them hone their craft.”

The event brought a diverse group of women: stay-at-home moms, teachers, executives, and business owners, ranging in age from their late 20s to early 50s. The retreat’s primary purpose was to help current coaches build skills so that NICA can continue to develop female leadership on its teams and in its leagues.

Another goal, Green said, was building connections between women. “They got to share information and learn from each other how to handle tricky situations. We talked about the things female coaches face, and we did it in a really welcoming , female-only environment.”

Three Days of Learning and Biking

The retreat, which took place Friday through Sunday near Oakridge, Oregon, was a mix of leadership development sessions, expert industry panels, and skills training followed by guided mountain rides in the afternoon. People cooled off in the river in the evenings and gathered to share a fun meal.

The sessions kicked off on Friday with a discussion about how the stories women tell themselves can hold them back. “Most women come to things like this with a lot of self-limiting beliefs,” said Green. “We dug into those and tried to understand how those stories impact us as coaches and leaders.”

Each woman anonymously wrote down a self-limiting belief they had as a coach and a rider. Then everyone picked another person’s and read it aloud. “Every single one was similar,” said Green. “They were about not feeling good enough, even the ones from really experienced women and C-suite executives. That first exercise led to many conversations over the weekend about how we were raised and how that can lead to these insecurities. How do we stop that cycle with young women?”

Wolfgang and Hauswald both started riding bikes as young girls. Wolfgang’s father was a maintenance man at an apartment complex near the University of Florida, and he often brought home bikes that college kids had tossed out when they moved. “I grew up in the middle of nowhere in a very small town just outside of Gainesville,” said Wolfgang. “I remember the first bike I got for Christmas and riding it around on our dirt road with my brother.”

She moved to San Francisco in her twenties, where she started riding on hills and mountains. “I had no idea how to ride the hills in San Francisco,” she laughed. “I didn’t even shift gears that much in Florida! I’d just go really fast, and my friend had to teach me how to climb.”

She did a bike tour of Canada at age 23, then began racing cyclocross and mountain bikes.

Hauswald also got into cycling as a kid because of her father. “He was an avid road bike touring fanatic, so he introduced my brother and me to touring when we were quite young.”

She started mountain biking when she moved to Durango, Colorado, to attend Fort Lewis College in the late 90s.

Green started mountain biking over 20 years ago when she began riding with her husband. “I had a rigid steel frame bike with 26-inch wheels, and I somehow made it through Crested Butte. I don’t know how I didn’t fall off the edge of a cliff on that bike!”

While she started biking in earnest later in life, she grew up sailing, another sport primarily dominated by men. “I grew up racing against boys,” she said. “I think that’s why these types of sports have never daunted me.”

Now all three women want to give young riders the assurance and courage they built while learning to ride. “You can use mountain biking as a tool to build confidence and competence in girls, and a part of that is helping women to level up and help lead. To be role models for girls.”

Key Takeaways from the Retreat

Post-event survey results were positive. Some of the benefits mentioned by participants were gaining tangible leadership skills, learning from guided self-reflection, and having the time and direction to create strategies to build a positive team culture.

“The focus on good coaching being couched in positive role modeling and mentoring, rather than in how fast you can ride or how rad you can get, was also eye-opening for a lot of attendees,” said Hauswald. “We also provided the platform for many women with similar interests and motivations to meet one another, learn from one another, and come away from the event with a female coaching community to lean on as they move forward.”

Green said she left feeling they needed to do more of this. “There is such a demand for, and such a benefit in, taking the time to build relationships among women and share experiences. Each person brings something special and so much knowledge to an event like that.”

Offering Support To A Lonely Rider

How Bikes Transformed a Community

Did you enjoy this article? Sign up today and receive updates straight to your inbox.

We will never share or sell your personal information.